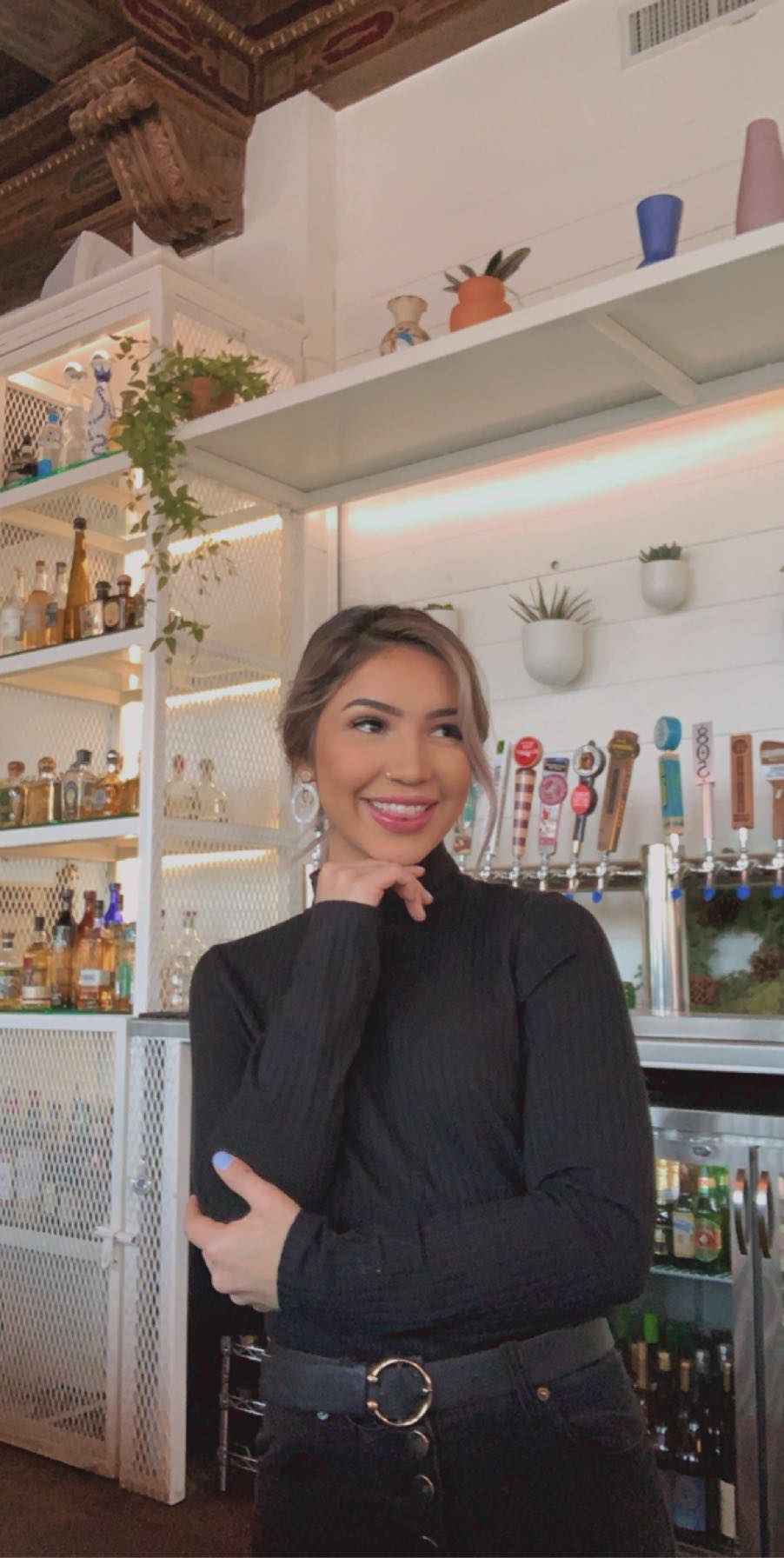 Rixa was born in Guadalajara, Jalisco, MX. Her family was living in a shack-like place and were struggling to make ends meet. Thankfully, her dad was offered a job in the states and was able to settle in. After six months of being in the states, he brought Rixa and his wife over. Rixa’s dad went back to help his wife and Rixa cross the border, carrying Rixa on his back through the desert. She was a year and a half when she came to the U.S.

When did it hit you that you were undocumented?

I knew I was undocumented when I was younger but it didn’t really hit me till I was in middle school. The conversations about college and our careers became more serious. I remember thinking that I wanted to become a cop and then having to come to terms — like, “How can you be a cop when cops are looking for you?”

I also began to get presented opportunities, and my parents had to be told that certain things couldn’t happen because we couldn’t provide certain information. I think that the first time that I realize how much my status was affecting me was when I was trying to go to a camp and I was applying for financial aid and they told me I didn’t qualify because I didn’t have a social. I had to pay full price for it and I couldn’t because my parents were low income.

That was really hard because it made me realize that obviously what I’m doing isn’t enough and I have to work harder. I had to prove more to people.  I felt that everyone else could half-ass everything and then still get their gold stars or scholarships but I had to be a 4.0 student my entire life and still not even be enough.

Eventually, I started to attend different camps. I am a light-skin Mexican, but obviously they could tell I was Mexican, so I would get shit for that. I remember the first year I went to a 4H camp [a leadership camp] there were only three other Mexicans from a conference of 400 — that was actually the first time I got told to “go back to my country.” It was harsh to hear stuff like that knowing I grew up here. Like, I know I’m from Mexico and that is where I’m from, but my parents never really talked about Mexico too much they never really pushed much of the culture on me. So I feel like I’m an Americanized version. Entiendo que soy Mexicana, hablo espanol, entiendo el espanol, pero saber como ese en el pais I don’t really know. I was naive to a lot of things, so when people would make fun of me, or tell me to go back to my country, I would be like I don’t even know where that’s even at. I know where I’m from, but I don’t know the culture and don’t have any personal experiences.

How did your life change when you obtained DACA status?

I remember that summer I was coming back from 4H camp and they had made the decision that DACA was going to happen. I was on the bus ride home when I saw it on my phone, and I remember I got up and went to Liliana, who has been my mentor for years and has been someone who has really pushed me to go into all of this program, and I was like “Lili they passed it, I can do things now!” and we both started crying and I was like wow I can get a driver’s license and work legally. I was still a year from the eligible age to apply but I could start gathering all my information for that day came. I remember that day perfectly and just thinking about how things were possible now. It was huge for me.

Did having DACA make you less afraid?

I think I was never really afraid for myself as much as it was for my parents. But it gave me peace of mind knowing I had a bit of protection.

Can you go back to the last presidential election, and the feelings that you had after the results and what that could mean to immigrants and DACA recipients?

Oh yeah! As soon as they posted the results late that night I cried. I stayed up and just cried. I was in my first semester of college at Boise State and I remember I spent that night freaking out and thinking “what’s going to happen to me? I’m in the system, they have my address and everything, they can come get me.”

I remember that probably an hour or two after the results got posted the professor that I had class for the next day sent us all an email to everyone saying that we didn’t have to go to class if we didn’t want to and we could take a day to recollect if we needed to. So I didn’t go to school for a day or two because I was terrified I got to an almost all-white college and knew that were many people who were for Trump. So I just stayed home wondering what this was going to come to, and never in a million years would I have thought it was going to be as bad as it is today. I knew it was going to be bad and ugly but not to the extent we have seen.

Can you tell me what is something that you are the proudest of so far?

My activism. I have been able to share my story with a lot of people. I have received a lot of high recognition which has been such a great honor. I have been able to speak at rallies, speak at protests, be featured in Seventeen magazine, and I even have a Grammy under my name, which I don’t really talk about much. But just little accomplishments like that have been really cool.

They were amazing opportunities that I was able to get because I’m not afraid of talking about my stories. But, I do understand that there are a lot of people who are, and me speaking out speaks up for them. Even though our stories are not the same they are very similar. If I can say something that’s great, I’m getting this recognition for it that’s really cool, but that just means more exposure, and that exposure it’s what’s going to help. Because when that Seventeen magazine came out I was getting messages from women all across the states talking about how they have a similar story.

Also, I had lots of people here locally who knew me but didn’t know I was a DACA recipient reach out to me and tell me how they had no idea. People who I would constantly hear talking bad things about us. And they would be like ‘no you are not the same,” but it’s like no there are thousands of people just like me, and you heard my story and that made you rethink about how maybe things aren’t really how they are always portrayed in the media.

What are you hoping to accomplish in the future?

I want to be a congresswoman. But I’m still waiting to see what changes get made in our system. I also want to get my engineering degree and maybe go into teaching.

What do you wish more people knew about immigrants/DACA recipients?

We are your doctors, lawyers, the people who are servicing you at the front desk, bakers, your next-door neighbor who invited you to the carne asada, we are all around you. We are successful people and hardworking people. Give us a shot. We are not telling you to give us things we want to work for it but at least give us that opportunity. Don’t cut us short before we can even get there. We are an asset to this country.

What message do you have for DACA recipients?

Keep talking about it. Don’t ever stop talking about it. Even if it’s not being a speaker at a protest or speaking out publicly that’s ok, but speak to people around you. Encourage people to vote. I always tell people, “I can’t vote so I need you to go vote for me.” If you can get 20/30 people to go vote on your behalf, that’s huge, you have people that might not have gone out to vote, now going because of you. I wish I could vote, and have a say on things. But, the thing I can do is tell you my story, how it affects me, and how I’m no different than you. So don’t stop talking about it!