What the Same-Sex Marriage Rulings Mean for Idaho 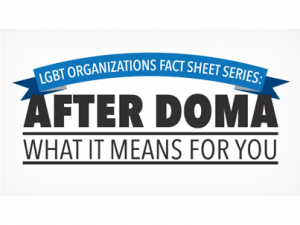 Op-ed by Monica Hopkins, ACLU of Idaho Executive Director. Originally published in the Idaho Statesman 07/08/2013.
On June 26, the U.S. Supreme Court ruled that section three of the so-called "Defense of Marriage Act" was unconstitutional and that the federal government cannot discriminate against married lesbian and gay couples for the purposes of determining federal benefits and protections. This ruling is a historic victory for gay and lesbian Americans and a tremendous step forward for the cause of equality.
The court's ruling said: "The history of DOMA's enactment and its own text demonstrate that interference with the equal dignity of same-sex marriages, a dignity conferred by the States in the exercise of their sovereign power, was more than an incidental effect of the federal statute. It was its essence."
The justices ruled in favor of Edith "Edie" Windsor, who sued the federal government for failing to recognize her marriage to her partner, Thea Spyer, after Spyer's death. Windsor and Spyer met in the early 1960s. Spyer was diagnosed with multiple sclerosis in 1977, and Windsor helped her through her long battle with the disease, which eventually left Spyer paralyzed. Windsor and Spyer, who were a couple for 44 years, were married in 2007.
When Spyer died in 2009, she left all of her property to Windsor, including the apartment that they shared. But because DOMA prevented the federal government from recognizing the marriages of gay people, Windsor was forced to pay $363,000 in estate taxes that she would not have owed if she had been married to a man. Windsor's attorneys argued that DOMA denied her, and other gay and lesbian married couples, the equal protection of the law guaranteed by the U.S. Constitution. And the court agreed.
The Supreme Court's decision striking down DOMA does not change our state marriage laws. It simply says that once a couple is married, the federal government will respect that marriage for federal purposes. The decision striking down Prop 8 only applies to California.
While these decisions do not alter or change Idaho law, overturning Section 3 of DOMA has a profound effect on legally married same-sex couples that reside in Idaho.
There are more than 1,100 places in federal law where a protection or responsibility is based on marital status. The ruling striking down DOMA will not be effective until 25 days from the decision, but even when effective, federal agencies - large bureaucracies - may need and take some time to change forms, implement procedures, train personnel, and efficiently incorporate same-sex couples into the spousal-based system.
Until same-sex couples can marry in every state in the nation, there will be uncertainty about the extent to which same-sex spouses will receive federal marital-based protections nationwide. For federal programs that assess marital status based on the law of a state that does not respect marriages of same-sex couples, those state laws will likely pose obstacles for legally married couples and surviving spouses in accessing federal protections and responsibilities.
To help couples, attorneys, CPAs and the general public navigate these waters, the ACLU along with partner organizations have created the "After DOMA: What it Means For You" fact sheet series, which details many of the ways federal agencies accord legal respect to married same-sex couples. The guide includes 14 fact sheets on the following topics: bankruptcy, Free Application for Federal Student Aid (FAFSA), federal employee benefits, Family Medical Leave Act (FMLA), immigration, Medicaid, Medicare, military spousal benefits, private employment benefits, Social Security, Supplemental Security Income, taxes, Temporary Assistance for Needy Families (TANF) and veteran spousal benefits. The series can be accessed at www.acluidaho.org/issues/lgbt-equality.
As the federal government moves forward with incorporating legally married same-sex couples into the spousal-based systems, the ACLU of Idaho will continue to provide information and resources that help individuals after this momentous decision.